+  DEFINITION:
The following is the official/ standard definition (courtesy of the Society of American Archivists) of an archival series: 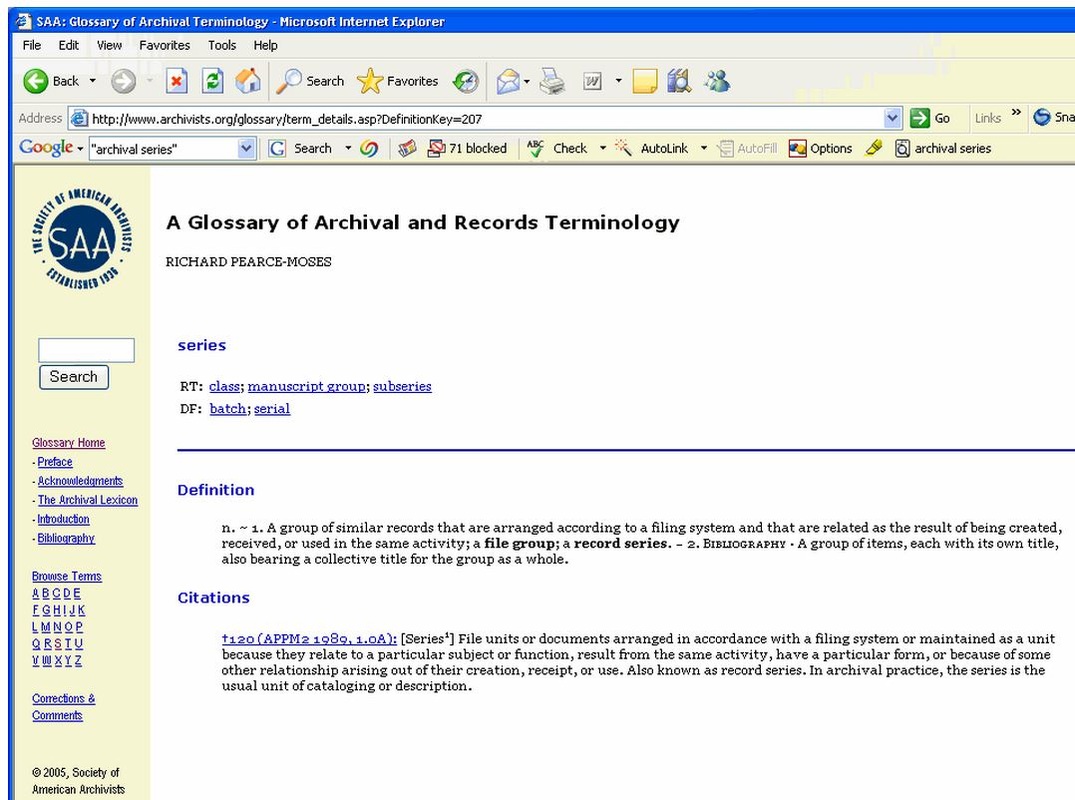 In short, a series is the general category of the type of materials and  the most important level of archival arrangement.  A given series is constituted of records that…
* relate to a particular subject or function
* result from the same activity, the same accumulation process, or the same filing process
* have a particular form, or
* are related by use, receipt, or creation
EXAMPLES OF THIS KEY AT WORK:

Click on each of the following hyperlinks and look at examples of series in these online inventories of different types of collections that were organized by the author of this tutorial during his 17 years of establishing the archives at the Southwest Studies Center at Fort Lewis College:
+  A simple collection of personal papers.

+ A large collection of personal papers.

+ Papers of a politician whose collection is quite large and quite detailed in its organization.

+ A simple collection of records of a non-profit organization.

+ A simple collection of records of a business.

+ Records of a company that inherited numerous preexisting companies; a large collection, divided into Record Groups, each of which has series and sub-series within it.

+ Records in an artificially constructed collection pertaining to a topic.

+ A large, complex collection of photographs.

Note: often, we have just a single series in a collection of photographs, and don't describe a series at all in that inventory, such as this one.
PRACTICAL HOW-TO’S:
A series description includes these components (in this sequence):
For example: Robert Blue, incoming correspondence, 1934-1959 (bulk 1948-1952), 3 folders.  In chronological order.  Includes 4 letters from Esther Mayfield, 1936, and a thank-you letter from President Dwight Eisenhower dated May 4, 1953.
Typically, we order the various series in a collection from highest hierarchical level to lowest, or from most general to most specific.  Generally, the first series you list is the highest in the hierarchy of the collection you are describing and/or contains the most distilled and concise information.  The last series would be the one with the most diffused, detailed information.

Also, view other online sources for further examples and/or discussion of this Key.
YOUR PRACTICAL APPLICATION:

To do in Hunter:
1.  Read his definition of a series and his explanation of why the concept is so important, on pages 117-118..
2.  Study his explanation and examples of writing a series description, from the bottom of page 137 through page 140.

To do in Bressor:
1.  Read page 44 to see another example of (four) series descriptions.
2.  While your head is in that little book, read pages 35-36 for a quick overview on processing a small archival collection.

Practice recognizing the series in an unorganized group of documents:
Let's say you've just come up to bat against (or with) an old brown corrugated paper box that contains the following items loose and in no apparent order. Let's call it the Robert and Esther Blue papers. Now, organize these into series.

Note: generally, we organize series hierarchically, starting with the series of materials that tell us the most about the subject of the collection in the most condensed form possible, and then moving on down to (at the end) the items that are the most diffuse—followed by photographs and oversized items (at the end of all the series—because we store the photos in a separate cool film storage room and we store oversize items in flat file drawers). For example, in a collection of records of an organization we generally start with legal records like bylaws, then the meeting minutes, then reports, then moving on down to the voluminous subject files, case files, etc., followed by oversize posters, maps, and blueprints, then photographs.  If the records don't seem to have a hierarchical ranking, it may be feasible to start with the series that are from the earliest date period.

3.   Published report about an archaeological expedition to Monument Valley, Arizona/New Mexico in 1934.

5.   A folder of correspondence received by Robert Greenfield in the course of his archaeological career, 1934-1959, including a thank-you letter from President Eisenhower dated May 4, 1953.

8.   A stack of notes from an archaeological expedition to Monument Valley, Arizona/New Mexico in 1934.

12.   A few more tourist pamphlets like the ones already mentioned.

Note/hint:   You may have five series, or you may have 10—but probably not all 12 as per the list above.  Some of the issues involved in organizing the above items into series are whether to have a separate series for each person's love letters, and whether to group all the yearbooks together in one single series and all the photos into a single series.  he deciding issue is whether the similar items are all going to be arranged in one sequence (usually it's in ascending chronological order, but sometimes alphabetically by folder title or—rarely—numerically by case number).  If you're finding you have to organize something first alphabetically and then chronologically, you're probably dealing with more than just one series.